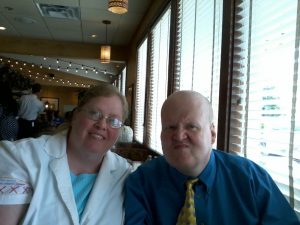 The teeter-totter goes up and then down.  Up and down.  The childhood memory of David and I on the teeter-totter flashes through my mind as I sit looking at my brother’s tombstone.  David wasn’t a huge fan of the teeter-totter, but for just a couple of minutes – life was normal.

My brother David was almost three years older than me.  All of my life my David was a part of each daily routine, schedule and consideration.  Born prematurely, David was gifted with several things that made him one-of-a-kind.  Diagnosed with autism, cerebral gigantism and several other life-altering conditions, David was a surviving superhero from his most early days.  The doctors told our parents that David wouldn’t live past his first birthday, but they underestimated David’s tenacity and strength.

After becoming David’s biggest supporter and caregiver at a very young age, I determined that David would always be in a safe, secure environment no matter what.  When I started dating my husband, I told him that at some point David would come live with me.  (How lucky I was to get a winner that would love David as much as I do!)  Just a few years after being married, David moved in with us.  For twenty-four plus years, we were David’s caregivers.

Four years before he died, David started having terrible seizures.  When the neurologist told us that our David had a brain tumor we were heartbroken.  David didn’t deserve yet another challenge in his life.  This brain tumor took his vision.  The tumor caused great pain.  But David, once again, showed his surviving superhero powers.  For four years he persevered and enjoyed what he could.  Although he couldn’t see any more, he still enjoyed listening to his favorite television shows.  Although he couldn’t walk anymore, he still enjoyed getting into his wheelchair and being taken out of the house.  When he became unable to leave his bed, resilient David still enjoyed holding onto his magazines and listening to his Superman cartoons.

His final days were difficult.  Although in great pain, my David was a trooper.  He seemed to find comfort in simple things.  He wanted us with him to hold his hand and rub his belly.  He wanted us to kiss his head and tell him we love him.

David’s last twenty-four hours were so hard.  We knew the end was near, and we wanted peace for David.  But selfishly, I didn’t want David to go.  I knew a part of me would go with him.  I would become that girl, instead of the girl with a brother with disabilities.

David has been gone from me for 15 months; I am crying as I type this.  I miss him so much.  Aside from my husband and just a few close friends, no one seems willing to talk about him.  I guess they don’t know what to say, but I don’t want him forgotten.  David was awesome and worth remembering!

The teeter-totter memory applies to life now.  Missing David goes up and down.  I believe David is in heaven and his body is whole and he is healthier and happier than ever.  I wouldn’t want him to come back to life here.  That’s an up on the teeter-totter.  But oh how I miss him!  The down of the teeter-totter is the huge void left in my world.  I was responsible for David’s well-being and care for just about my whole life.

I’ll see a picture of David and I smile.  David LOVED having his picture taken and he would humor me and pose with hats and whatever prop I could find for him to hold or stand next to!  That’s an up on the teeter-totter.  I’ll go into his empty bedroom and cry because I miss him.  The emptiness of his room reflects the empty spot in my heart.  That’s a big down on the teeter-totter of life.

An up is knowing I have no regrets for the life we lived with David.  We traveled, we ate out, we went to the park and we went cruising.  We gave David a full life.  A down is when we experience things now I wish David could experience it too.  A planned vacation has a hint of sadness as I plan an activity that I know David would have enjoyed.

Were there challenges living with David and being his caregiver?  Absolutely.  Superhero’s are high maintenance!  What we considered normal would scare so many others away.  David changed us – he helped us grow into deeper human beings.  This world would be a much better place if everyone had a David in their life.  David-people teach empathy, patience, acceptance, humility, and movable expectations.

In our world of hurry, zero tolerance and self-priority, the Davids, and those that love and care for the Davids, feel out of place.  How I wish that I could bottle up all that David gave to me and share it with everyone else.  I wish everyone could experience the joy of seeing Disney World through David’s eyes.  I wish everyone could be as friendly as David and reach out to shake hands with each person that crossed our path like David did.  David didn’t care what color, shape or size someone was.  If you walked past David he wanted to shake your hand.  If you were wearing a tie, he wanted to take a look at it.  When cruising David was satisfied to just lay down on the balcony and watch the water.  He enjoyed the simplicity of the most amazing experiences.  He knew how to just stop and be.

Noel King and her husband Rich live in the south suburbs of Chicago with their beloved pets – Hoss, Treasure, Precious and Mascara.  She currently works with the Illinois Self Advocacy Alliance and is thankful for the opportunities she has to help others; she is also actively involved with her church and especially enjoys getting to communicate with and help support the missionaries serving throughout the world.