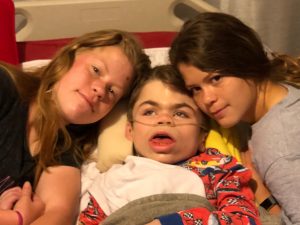 I don’t know when I realized my brother was going to die; there’s no distinct memory of my parents sitting me down with fake smiles and teary eyes. But, it wasn’t something I was consciously aware of my whole life. Somewhere along the line, I understood without being told, largely due to three things: the crises, the gradual decline, and the extraneous information.

The crises were sporadic and inconsistent, ranging in severity and time. It was his first seizure, and though the details are muddled, there is a clear image. My mom cradling him on the floor of our foyer against the sounds of ambulances coming from the station a block away, their red lights glaring against the night windows. The word first there is important, as they became constant afflictions; by the end, he seemed to be in one more than not.

Then, there was the gradual decline, where everything was slowly getting worse, though this “slow” was speeding up. He went from walking to standing to a wheelchair to confined to a hospital bed at the house. The weekly infusions were taken at home, and Hospice joined our household. Instead of chewing, he had

mushed foods, and to help him breathe, a tube ran to his nose. His infectious smile and joyous laughter became less and less common, and we doubted what he was aware of.

Finally, is the extraneous information, things not learned from my brother directly, but around him. It was when I finally learned the medical name for his condition – MPS II, not just Hunter’s – and could appease my Googling tendencies to find the WebMD page. “Unlikely to reach adulthood.” It was when I came downstairs to my mom on the couch, saving photos of my brother to a folder on her computer “to prepare.” (These photos would come in handy; she was just a few years early.) It was my dad telling my sister and I that we needed to be careful, staying out of his room when we had a runny nose or cough, because our brother “probably won’t make it” if he got sick. It was when people my parents hadn’t spoken to in years sent us meals and flowers with cards full of condolences.

Those were the worst, because it was the world confirming what was visible to me in other ways. If everything said he was going to die, there was no way to avoid that reality.

Even though all these signs were pointing to the inevitable conclusion, the curtain closing, it was still a surprise. As they say, everyone is immortal until proven otherwise. We all knew it was coming, but it had been coming for years, and everytime things got tough, he pulled through.

But I don’t focus on those things. Instead, I think of him being alive, but not in those terms. I remember him at his happiest, when he was most him, both big and little. Going to Disney, and he met his heroes: Buzz Lightyear and Woody. Laying squished next to him in his bed, watching Max and Ruby, my favorite of his TV shows. The house ever busy, a comfortable hum of his movie, his nurse, and the medical machinery in his room.

It’s hard to do this when the two things – the good and the bad – are so intertwined. We were in Disney because it was his Make-A-Wish. His bed was a hospital bed and he was 16 watching children’s cartoons. The house was busy because he couldn’t be alone and he needed constant care.

Still, though, there is happiness in every memory because he was there.